4 Jul 2008 - 2:39am | Dibya J Borthakur
In the name of routine check near Morigaon town chariali,two PSOs of the OC Morigaon Police Station allegedly beat up Manoj Deka,district secretary CPI,Morigaon at around 7 pm on July1. The...

26 Feb 2014 - 9:48am | AT News
Congress president Rahul visited Kamakhya temple on his last day of visit to Assam on Wednesday.Accompanied by Chief Minister Tarun Gogoi along with APCC president Bhubneswar Kalita, AICC leaders... 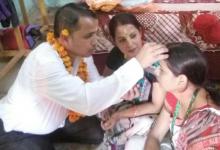