In an unique initiative Panery Police and Panery Thana Nagarik Samity organised a felicitation programme for meritorious students of greater Panery area who passed out 2017 HSLC and HS examination with flying colors in premises of Panery Police Station on Monday. The open session which was presided over by Hareswar Kalita was inaugurated by Ghateswar Baruah HOD of Assamese, Tangla College. Delivering the maiden speech Baruah appealed students community not to get absorbed in surfing social media sites and avoid rampant use of mobile phones.

Attending the programme as chief guest Binoy Kr. Medhi retired HOD of Political Science of Tangla College asked students to rebound with new force and vigour in upcoming hurdles of life. He exhorted students not to abandon their parents in old age and never forget the society and one's native place .Symbolizing the Lark bird of William Wordsworths' poem 'To The Skylark' to the students he asked them to soar on high. Attending the programme as guest of honour Dithakananda Hazarika ADC Udalguri mesmerized the audience with his melodious voice. He exhorted students to have a determined mind and dedicated approach towards achieving one's goal. A total of 59 students were feted on the ocassion with phulam gamosa, citation and a packet of books each. Sohrab Ali Officer-in-charge Panery PS offered vote-of-thanks on the ocassion.

The programme was also attended  by Hemanta Bora Koch AGS AKRSU Udalguri,Saiful Haque AASU General Secretary Udalguri besides by members of AAMSU,AASAA senior citizens,retired teachers among many eminent persons of the locality. 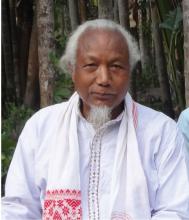 31 Dec 2015 - 9:14pm | AT News
Eminent artist and prime architect of Udalguri art village Rabiram Brahma has been announced the winner of Pranab Barua Art Award 2015. The selection committee has declared the name of Brahma, who is...

16 Mar 2017 - 12:25am | AT News
Senior political leader T Biren Singh took oath as Manipur Chief minister at a function in Imphal on Wednesday. Governor Dr Najma Heptulla administered him the oath of office and secrecy at the Raj...