To spread the message of cleanliness  and significance of conservation of wildlife Tangla Bikers Club organised a biking awareness rally from Tangla of Udalguri which culminated at Dawki along the Indo-Bangladesh border of Meghalaya. The rally which flagged off on July 10 concluded on July 13. The rally covered places like Barapani,Mawlynong,Dawki,Cherrapunjee. The 12 member biking team namely Dibyojyoti Medhi,Diganta Brahma,Kirtan Jal,Wajid Khan,Prince Baglary,Dedsung Boro,Dulal Rabha,Rashik Chowdhury,Hirania Deka,Adil Hussain,Gulsan Rabha,Kunaldo Rabha covered nearly 900 kms.
On the way, the bikers halted at Mawlynong - the cleanest village of Asia  and interacted with the village authorities and school children to learn their skills of cleanliness . They also interacted about the significance of wildlife conservation.
Congratulating the bikers for success of the rally, Nabajyoti Baruah noted wildlife activist of Udalguri said" Climate change has become a reality, affecting our environment in some way or the other. Such biking rally  opens our mind to take care of our nature, animal, weather and our environment."
Calling the media the a great medium for disseminating the awareness on conservation and protection of wildlife and bio-diversity, Baruah said that it is through media that the peoplw and the society at large can be sensitised on the issue.
Baruah hoped the bike riders would act ambassadors to spread the message to protect and conserve the wildlife among the villages of Udalguri . 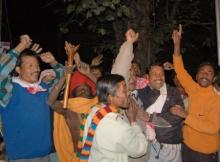 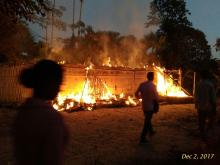 16 May 2012 - 2:15am | editor
The Electronic Media Forum Assam (EMFA) has appealed to news channels based in Guwahati to exercise restrain on providing publicity related to the entry (appointment ) or exit (because of...