First round of admission test and interview for English, History, Sociology, Education and Philosophy is scheduled for 8th June 2017. While Political Science, Geography and Mass Communication admission procedure is on 9th June, B.Com, BBA and BCA admission formalities will be held on 10th June 2017.

Second round of admission test and interview will be held on 21 June.

“Students of BA Honours in Journalism & Mass Communication will have state of the art audio editing labs as well as hands on experience in the various aspects of radio production like scripting, editing, doing interview as well as anchoring shows as RJs in the one and only college community radio in West Bengal and entire northeast India,” says Vice-Principal Fr C.M. Paul.

“Seminarians, Religious Sisters and others wishing to pursue BA degree in Philosophy at SCS may now avail of this opportunity for higher studies,” says Principal Dr George Thadathil.

Currently Salesian, Claretian and Diocesan seminarians from the region as well as religious Sisters are participating in the BA Philosophy program.

Besides academic pursuits, SCS students every Sunday reach out to some 20 tea gardens and conduct youth centre programs. Established in 1938, SCS has a larger and sprawling campus in Siliguri plains with 12 departments in Arts, Commerce and Science schools. 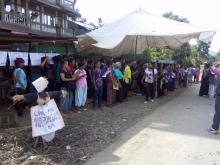