26 Dec 2008 - 12:43am | Bikash Das
An woman was killed in an road mishap today took place at 3-30pm at Jalimura under Kamalpur PS in Kamrup district. According to Police sources a motorcycle going from Kamalpur towards Baihata...

24 Apr 2014 - 6:39pm | AT News
Polling has ended with a brisk note in Barpeta as soon as the clock struck at 5 in the evening. The turn out is set to cross 85 per cent to be confirmed by the country’s poll panel.Heavy turn out of... 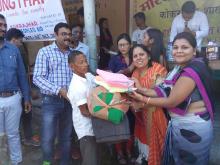 30 Oct 2017 - 12:47pm | AT Kokrajhar Bureau
A mass warm clothes distribution programme among remote needy peoples was organised at Sonapur Lalai village along the Indo-Bhutan border area in Chirang district on Sunday.The peoples from the area...