The international event has been coincided with the celebration of 33rd foundation day of the Bodo Writers' Academy, an organization of Bodo writers in the state of Assam. Several book stalls from different parts of the the country,apart from state,including National Book Trust(NBT),Tripura,West Bengal are participated in the event.

Several books written and published by different publications were unveiled which included Rebgon,a souvenir of the reception committee on the occasion. Manindra Chandra,SDO(civil),Dhansri unveiled the Rebgon souvenir of the reception committee that brought out on the occasion.Former MLA Rakeswar Brahma also released  two-books written by Dr Rupali Swargiyary, noted writer.

A lecture on the topic of vision & mission of the Bodo Writers’ Academy was held with Bijay Baglary. Rakhao Basumatary,noted writer,Rajendra Nath Boro,president Boro Somaj,Ughen Raften,secretary of India Bhutan Friendship Association(BIFA) graced as speakers on the occasion.

Chief Minister Sarbananda Sonowal will grace as chief guest while Hagrama Mohilary, BTC chief will be attending as inaugurator on the open session on the concluding day of the event on March 23. 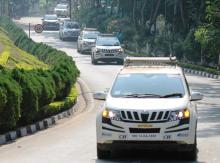