Geneva March 10: Food poisoning is now a global phenomenon. But India has reasons to be worried where the country has been witnessing a series of incidents at regular intervals.

Foods in the country is far from being fresh and healthy where pesticides and chemical fertilizers are used to boost the production.

These are more or less of what a representative from India said at the ongoing UN Human Rights Conference in Geneva on Thursday. In his speech, Pankaj Jyoti Hazarika, who represented Prahar, a non governmental organization said Assam is one of the state where these incidents have been hitting media headlines.

“In the promotion of health and prevention of disease the role of nutrition food cannot be neglected but in India food becomes a major concern. Although the country men depend mainly on agriculture, Indian farmers vastly use pesticides and chemical fertilizers for more productivity on their agricultural farms,” said.

According to Hazarika, 351,000 people die of food poisoning every year worldwide. Largely use of pesticides is causing these kinds of tragic incidents. In Assam every year in August-September, many people have been suffering from food poisoning and many have lost their lives.

He said,"These months are very holistic months for the Assamese people and they take grams and cheek peas as Prasad. But unfortunately, every time this religious holy Prasad turns into poison resulting into death and illness for the Assamese.”

In recent past  in Assam, some 125 people fell ill after consuming prasad in Majuli. Victims included 57 females and 22 children over the age of seven. In an earlier incident in 2015, 3 people died while 530 people affected by food poisoning in two different incidents in Assam, said Hazarika. 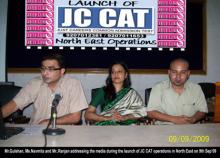