Amidst the protests across the state against the Silapathar incident in which activists of Nikhil Bharat Bangali Udbastu Samanvay Samiti (NIBBUSS) went on a rampage and ransacked an office of the AASU at Silapathar in Dhemaji district. A peace-keeping meeting was conveyed at Tangla VDP office in premises of Tangla Police Station on Tuesday.

The meeting condemning the incident called for promoting brotherhood and maintaining peace and harmony among different classes and communities of the state .The Udalguri district adminstration exhorted to all sections of people of the state to maintain peace .

The peace-keepers also maintained that no anti-social elements should be given way to add communal tone to the incident. 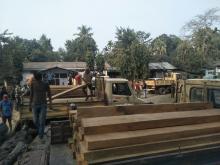 1 Feb 2018 - 5:35am | AT News
BY RAJESH MANDAL TEZPUR: Despite a stepped up vigil smuggling of forest resources refuses to die down along the Assam-Arunachal Pradesh border. The safe transit route, these days, is the Bhalukpung...

3 Jan 2011 - 10:52pm | DigantaTalukdar
The 2nd State Games, 2010 was inaugurated today in Nagaon, organized by Nagaon Sports Association under the auspices of Assam Olympic Association. The dazzling inaugural function was held at Nurul...