An escalating tension prevails in Silapothar area of Dhemaji district after a group of protesters attacked a local AASU office on Monday forcing the authority to beef up security apprehending a massive group clash.

Security forces are patrolling on the streets to prevent any gathering. The clash took place in the afternoon when hundreds of NIBBUS activists took out a procession in support of the move to welcome the Hindu refugees from Bangladesh and Nepal.

A section of the protestors started melting stones at a local AASU office when the student leaders were not available.

As the office was attacked many students and AASU activists countered them with a clash and the situation was brought  under control after police resorted to lathi charge  and lobbing tear gas shells.

7 Aug 2015 - 1:10pm | AT Political Bureau
Chief minister Tarun Gogoi is holding a crucial meeting with Rahul Gandhi in New Delhi along with his counterparts in Manipur and Arunachal Pradesh.The Naga peace pact is believed to be the agenda of... 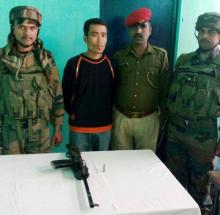