A 31 year old Mukut Koch allegedly hacked his father to death at their house in  Odola under Harisinga police station in Udalguri district on Thursday night  over a trivial dispute on family matters .

The deceased has been identified as  Lakhi Koch  (51) .According to  sources  the duo had some altercations over family matters and in the hit-of-the moment the son Mukut Koch allegedly hacked  his father to death with a dao The locals informed  Harisinga police following which police rushed  the spot and arrested the son. The body has been sent to Udalguri civil hospital for postmortem on Friday . The accused has been forwarded to judicial custody. 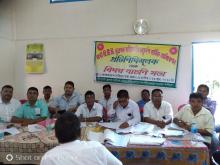 6 May 2020 - 8:16pm | AT Kokrajhar Bureau
KOKRAJHAR: A two-member delegation team of the All Bodo Students Union(ABSU) met the Administrator of BTC Rajesh Prasad and submitted a memorandum to urge for making enable better administration,...