In yet another incident of man elephant conflict, wild elephants took the life of woman in the outskirt of Guwahati city on Wednesday.

The incident took place in Rani area border Meghalaya where a heard of wild elephants trampled to death a woman in the morning. Identified as Renu Nath, she was at home as the elephants stormed into her home.

The heard of wild elephants has been unleashing no less reign of terror in the entire area destroying pady fields and damaging houses for the last couple of months.

Leopard crushed to death in Margherita

20 Dec 2017 - 3:50pm | AT News
MARGHERITA:Speeding car crushed to death a full grown leopard in Margherita seeing huge shock among the animal lovers on Wednesday. The incident took place at Pawoi area in East Margherita when a... 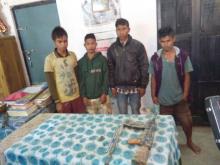