Its a dream come true for the people in lower Assam districts. In a major boost to address the surface communication gap, union road and transport minister Nitin Gadkari opened the second Saraighat bridge over the Brahmaputra river in Guwahati on Sunday.

Gadkari, in his address, called it a milestone in the bid to bridge the yawning communication gap with Guwahati with the rest of the country.

Ten years back, the then prime minister Dr Manmohan Singh laid the foundation stone and it took ten years to complete the huge bridge over the Brahmaputra river. 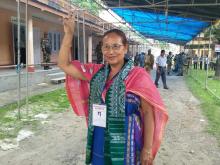 23 Jun 2015 - 8:48pm | Hemanta Nath
Security forces on Tuesday had recovered huge cache of arms and ammunition from Goalpara district along Meghalaya border. Following a tip-off, troops of army and police had launched operation at...