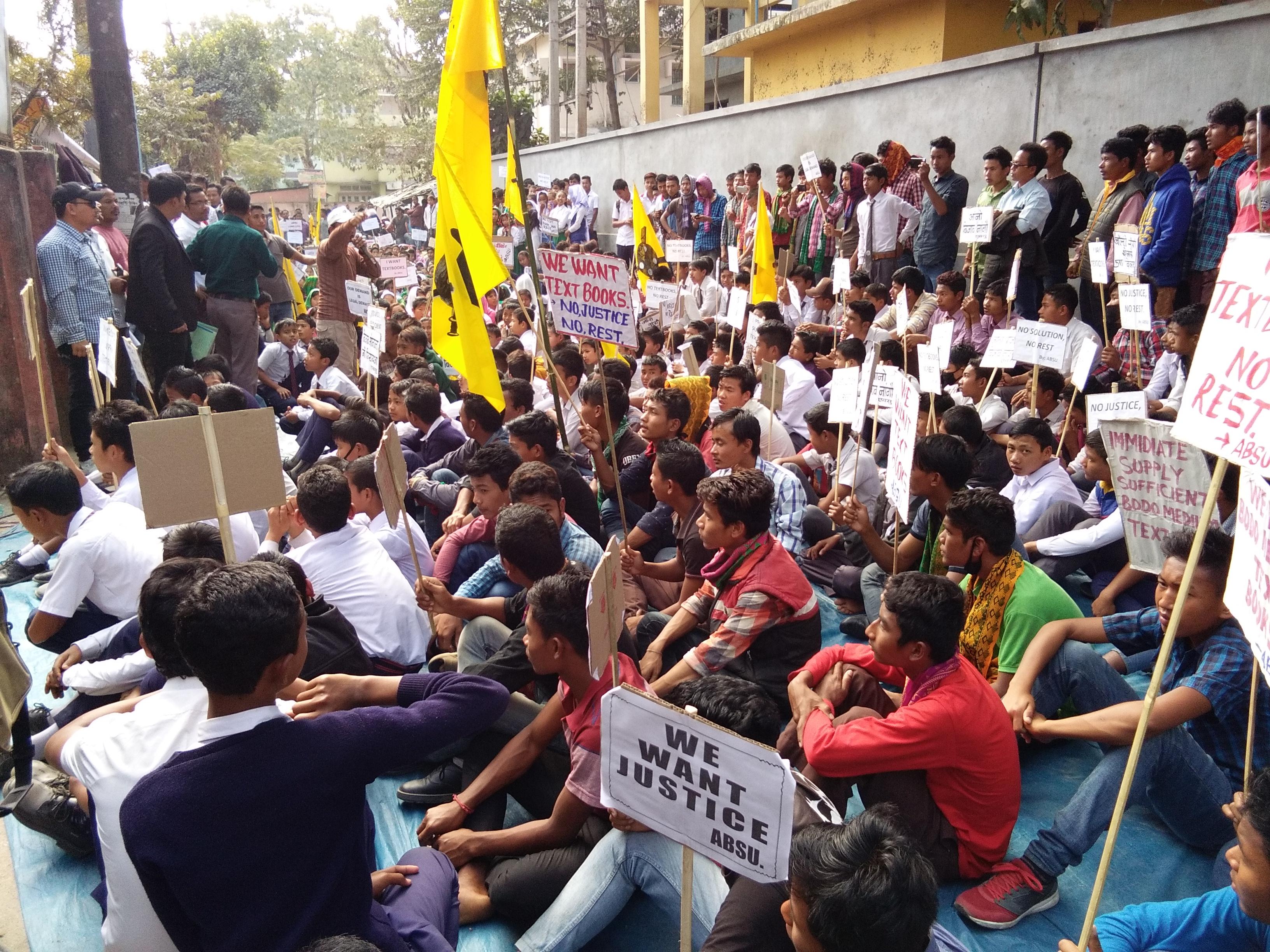 The students union observed 2-hour sit-in-dharna on Friday in front of DEEO office in Kokrajhar, demanded immediate supply & distribution of all textbooks from class I to X in the state.

Over thousand school children and students union activists along with publics from different parts of the Kokrajhar district join hands with banner, placards in the sit-in-dharna in front of the DEEO office in Kokrajhar on Friday that was started from 11 am, was organized by Kokrajhar district unit of ABSU. The student union and school children shouted slogans, demanding early supply and distribution of textbooks in the schools, reprint the wrongly printed textbooks for class VI, VII & VIII, make public the new education policy and open for public consultation.

The students union submitted a memorandum to Chief Minister Sarbananda Sonowal through DEEO, Kokrajhar seeking early supply and distribution of textbooks across the state.

Lawrence Islary, general secretary of the students union expresses serious concern over massive shortage of Bodo medium textbooks all over Assam, which is the repeated negligence by the government of Assam; which has brought the threat to the existence of Bodo medium education in the state. He demanded immediate available of textbooks from the state and supply urgently to all the schools to start the curriculum all over the state.

‘The students union strongly demands to make public the upcoming new education policy in the state and open up for public consultation’, Islary said.

Kastom Basumatary, education secretary of ABSU central committee, Prahalad Brahma, secretary of Kokrajhar district unit ABSU come down heavily on the state government and education department for negligence of textbook supply and distributions in the state, especially Bodo medium has been suffered lots.

They said that still today 30% percent of the textbooks have yet to receive in Bodo medium and 20% percent to be received for Assamese medium across the state. Government has been willingly delaying the supply and distribution of textbooks, they alleged.

They warn to lock education department offices if supply and distribution of textbooks would not be held by February 15 next. They also said that negligence by the government of Assam would not be tolerated at any cost.

‘We are taking education in schools as new curriculum started without textbooks in the state. Give us textbooks to take quality education among society’, said an agitated student in the dharna.

In remembrance of my Beloved Grandfather Late Md Alimuddin Ahmed

31 May 2022 - 2:56pm | Jerifa Wahid
Well-known and highly respected Asst. Head Master, special educationalist, social worker, and full of discipline, my loving grandfather – Md Alimuddin Ahmed, passed away in his own residence at...

10 Jan 2009 - 5:38pm | editor
There is report of encounter between police and ULFA cadres in Guwahati a day after the militants struck the city again with blast where three persons died and seven others have been injured....