Road communication was disrupted  for six hours from 6am in the district due to road blockade along 31C National Highway at Karigaon and Gurufela on Wednesday in Kokrajhar district, demanded early granting ST status to Adivashis, solve issue and problems of Adivasi ceasefire arms organization, stop eviction drive carried out by forest department in the forest areas in the state.The blockade was called by Adivasi National Convention Committee, an umbrella organization of five Adivasi arms organization to put pressure government over solution of Adivashis issues. Thousands of ANCC activists and Adivashis from different parts of the district participated with banner, placards blockade the road and shouted slogans early solution of issues and problems.

Ambrit Beck, Birshing MundamBoyal Hembrom, ANCC leaders slammed government for not taking any measures to solve issue and problems of the Adivashis in the state. He has warned to go mass more agitation if government fail to solve their ssues. 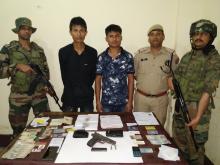