The carnage in Kokrajhar, flood, price rise and Hindu refugee issues left the BJP-led government embarrassed when the Assam Assembly resumed its budget session on Monday.

Congress legislators along with their AUIDF counterparts demanded a statement from the Government. Later, AGP members also joined them.

The Opposition tore apart the BJP-led Government alleging the failure of Sarbananda Sonowal who also holds the home portfolio, to ensure safety of the common people.

The session started at 9-30 in the morning which will continue till August 13. 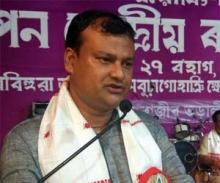