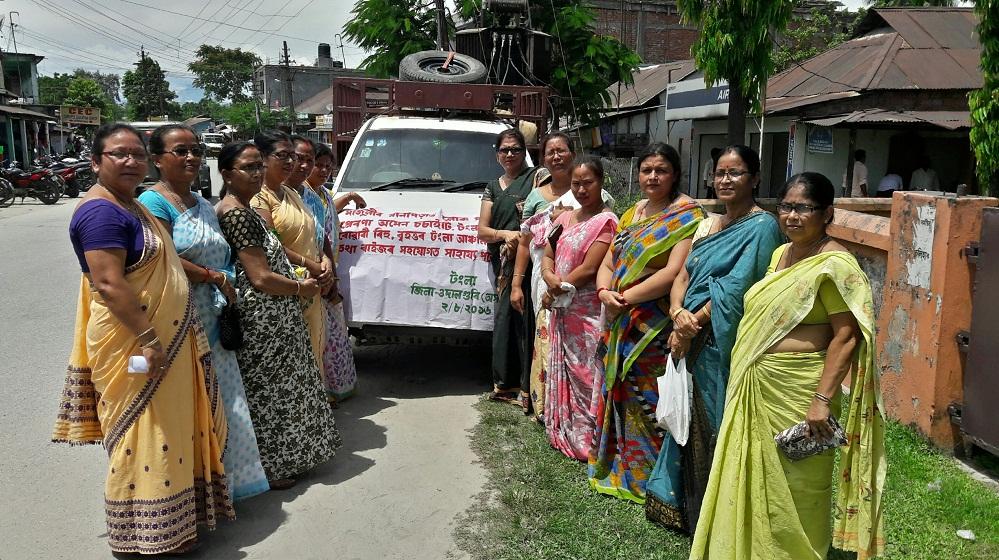 In an effort to help the flood affected people of Majuli riverine island women of greater Tangla area had joined hands to raise funds . The Prerona Women Society NGO,Sadou Tangla Buwari Bihu,Brihotor Tangla Manila Samaj and many other SHG have collected relief materials and funds moving door to door for a week.

Nearly 100 women were engaged in this humanatarian work to help the flood affected people. The local people have also helped them by funds and praised their efforts.

A vehicle containing relief materials comprising of food stuffs,clothes etc; were sent to Majuli with the help of SDPO Bhergaon Pranjal Borah on Tuesday.

The programme of flagging off the vehicle containing relief materials was attended by Jatin Deka District President of AGP,Dipak Talukdar social worker,D.Kalita OC Tangla PS,senior journalist Bapan Sarma and journalist Shajid Khan along with the batch of women.

7 Mar 2014 - 2:48pm | Raju Baruah
Tezpur joins KMSS black day on Friday in protest against the arrest of Akhil Gogoi along with 5 other of his associates.KMSS activists in the Sonitpur district headquarters observed the black day...

1 Jan 2014 - 9:03pm | Neelakshi Bordoloi
Lack of able political leadership is the basic crisis facing Assam today and is at the root of many grave problems plaguing the state. Various forms of leadership crisis that is plaguing Assam and...