8 Nov 2010 - 5:01pm | Abdul Gani
It was proud moment for Adil Hussain, who plays a major role in the movie ‘Gangor’, to receive a standing ovation from the crowd along with the ‘Gangor’ unit at the red... 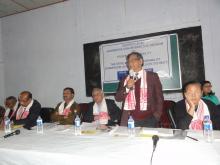