Tribute to Bhupen Hazarika at Chennai

12 Nov 2013 - 3:25pm | Indukalpa
Assam Association, Chennai is organizing a cultural evening on November17  to pay tribute to the great legendary Dr. Bhupen Hazarika on occasion of his 2nd death anniversary... 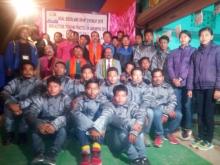