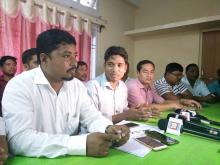 10 Aug 2017 - 9:11pm | AT Kokrajhar Bureau
Many parties, organizations and individuals have been demanding speedy probe into the killing of Lafikul Islam Ahmed to put the culprits behind the bars. Student unions in Kokrajhar have threatened...

20 Feb 2017 - 7:13pm | AT Kokrajhar Bureau
Altogether 36 students were expelled for taking unfair means in Monday’s mathematics  examination in the HSLC examination in Kokrajhar district. The examination has been conducted in a strict...

22 Oct 2011 - 3:26am | editor
Aaranyak is organizing a series of awareness programme as part of its ‘Brahmaputra River Dolphin Day, 2011’ on the occasion of the International Fresh Water Dolphin Day, i.e. 24th...