2 Oct 2008 - 1:32am | editor
Veteran freedom fighter Powal Barua will attend the 'Guest of the Month' programme of Guwahati Press Club tomorrow (2nd October). During the program, staring at 12 noon in the GPC auditorium, Barua...

16 Oct 2009 - 10:59am | DigantaTalukdar
Deepavali, one of the festival celebrated all over the country by Hindu people. Deepavali means different things to people of different states of the country, in keeping with the different legends... 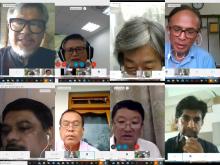 15 Jul 2020 - 5:49pm | AT News
An International Webinar Series -2 on the Theme: "Bamboo: a potential resource for the uplifting rural economy in post-COVID pandemic situation in Northeast Inda” was held on 10th July 2020 organised...