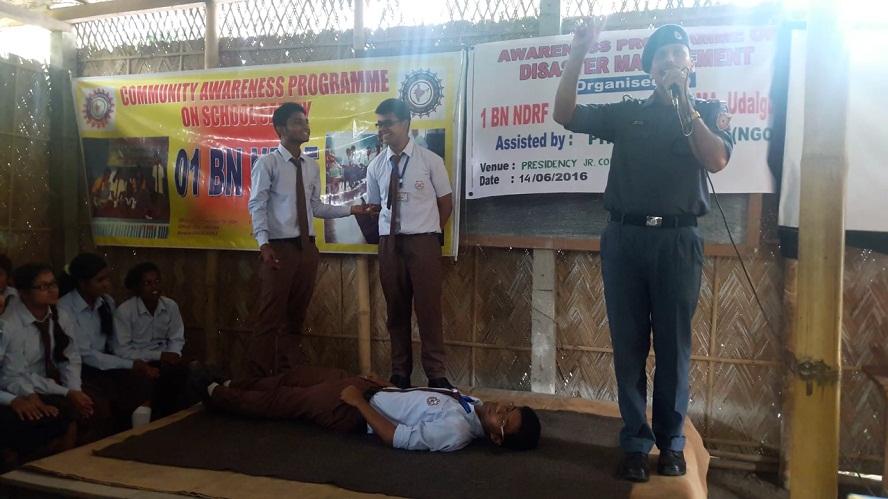 The National Disaster Response Force (NDRF) in collaboration with District disaster management authority assisted by local NGO Pherangadao as a part of their school outreach programme to educate children about disaster preparedness and mitigation organized a community awareness programme at Presidency Jr. College premises on Tuesday. A 15-member-team from 01 Battalion NDRF (National Disaster Response Force) Patgaon (Kamrup) imparting training on disaster management awareness preparedness and demonstration of its tools and equipments for the school students.

Topics on MFR (Medical first responder) CSSR (Collapsed structure search & rescue), school safety training, urban search & rescue, earthquake, flood, land slide and community responders,road accidenta were covered during the five day training programme. There will be an interaction session with team. The objective of such campaign is to build capacities. Students were shown how to save lives and make low cost life-saving equipment like boats made with materials available locally. A mock drill of effective handling of injured person in accidents was also staged.

Talking to Assam Times a commander of the team Yadav said"Our 01 Bn.NDRF is assigned basically tocover Darrang,Sonitpur,Baksa,Udalguri districts in any emergency situations that include man-made and natural disasters. We jump into action in half an hour and travel through the shortest route possible,when necessity arises stanby teams are called for help. We jointly work with troops of District and State Disaster Management and local fire-fighters." Students were also showcased footages and rescue operations by NDRF troops in Nepal earth quake,Uttarakhand cloud-burst,Orissa cyclone etc; The programme was also attended by Saptati Endow Assistant commisoner in charge SDO(civil) of Bhergaon . She also delivered few words on the ocassion.

26 Feb 2018 - 11:42am | AT News
SHILLONG: Amid watertight security arrangement, Meghalaya is all set to go to the polls to elect 59 legislators in the 60 member assembly on Tuesday. Altogether 1.8 million voters are gearing up to...

17 Oct 2010 - 2:59am | editor
A hardcore NDFB cadre was killed at an encounter with security forces in Sonitpur district on Sarturday evening. The encounter took place at around 7 in the evening at Bhorajuli area under Bihali... 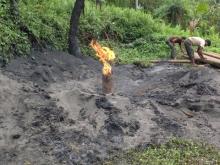 20 May 2013 - 7:29pm | Ripunjoy Das
An unusual incident occurred on Sunday at Namsang village in Tirap district of Arunachal Pradesh, about 12 KM from Deomali, when the labourers of Public Health and Engineering Department (...