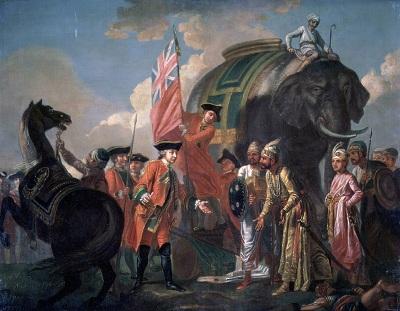 I have compiled long articles, papers and even a book on the contribution of Muslims in the Freedom Struggle of India in past 15 years. Here below I wish to repeat what I and other historians have already put in detail earlier. This is because Indians today are flooded with wrong pages of history and the facts are gradually becoming nonexistence.

Here are some facts, in concise; all Indians should deliberate over them before they party with any divisive forces of politics.

It was Emperor Aurangzeb who first asked the East India Company to quit India in 1686 in Surat.

The first war against the British was fought almost 200 years before independence- the Battle of Plassey, wherein Nawab Sirajuddawla of Bengal was treacherously defeated by the British in 1757.

The first signs of victory against the British were seen in Mysore where Nawab Hyder Ali first waged war against the British in 1782. He was succeeded by his son, Tipu Sultan who again fought them in 1791 and was eventually treacherously defeated and martyred in 1799.

Tipu Sultan was the first General to use missiles in warfare. He was the real missile man of the world or the father of modern missile technology.

The Mujahid Movement was active between 1824 and 1831 under the leadership of Syed Ahmad Shaheed and his two disciples and they were successful in liberating the North-West province from British authority. Syed Ahmad Shaheed was nominated Khalifa, but the freedom was short lived and he along with Maulana Ismail Shaheed were martyred in 1831 in Balakut.

The last Mughal Emperor, Bahadur Shah Zafar has led the First United War of India’s Independence in 1857. A country-wide war was to begin simultaneously on the 31st of May 1857, but the Indians among the British army could not control emotions and revolted before that on the 10th of May 1857.

A startling 5,00,000 Muslims were approximately martyred following the events of 1857, of which 50000 were Ulama (religious scholars) alone. It is said that there was not a single tree on the Grand Trunk Road from Delhi to Calcutta but that an alim’s body was not found hanging on it for days together.

To liberate the countrymen from the Cultural and Educational bondages of the colonial empire, towering centers of learning like the Jamia Millia Islamia University and Darul Uloom Deoband were established in the late 19th Century, which are still counted amongst the leading Indian seminaries.

The Indian National Congress, from the time of its inception to independence has seen 9 Presidents who were Muslims.

Barrister M. K. Gandhi served in a law firm in South Africa owned by a Muslim, who on his own expenses brought Gandhiji to India in 1916. Here, he started his agitation under the Ali Biradran (Ali Brothers).

The very title Mahatma for Gandhi was given by Khilafat Committee at Mumbai's Byculla situated Khilafat House.

The Mopla movement saw 3000 Muslims being martyred in a single battle!

The Non-cooperation Movement and the Swadeshi Movement saw overwhelming Muslim participation. Jamait Ulama-e Hind was first to demand for complete freedom of India from British and launched the Quite India Movement which later adopted by Indian National Congress.

Saboo Siddiq who was the Sugar-king of that time gave up his business as a form of boycott. The Khoja and Memon communities owned the biggest business houses of that time and they parted with their treasured industries to support the boycott.

The 1942 Quit India movement was actually supposed to be led by Jamait and Congress's combined leadership- Maulana Abul Kalam Azad. He was imprisoned on the 8th of August along with other Jamiat top leadership and sent to Ahmadnagar, because of which Gandhiji had to lead the movement on the 9th of August.

Jyotiba Phule was sponsored by his neighbour, Usman Bagban in his educational movement, so much so that the school in which he taught was owned by Mr. Usman. His daughter, Fatima was the first girl student there and joined as a teacher thereafter.

Muslim leaders always supported the Dalit cause. In the Round Table Conference held in London, Maulana Muhammad Ali Johar was lured into abandoning the Dalit cause in lieu of accepting all the other demands of the Muslims. But Maulana Johar refused to forsake the Dalits!
When Dr. B.R. Ambedkar could not win the 1946 Central Elections, the Bengal Muslim League vacated one of its own seats and offered it to Dr. Ambedkar, who won it in the bypoll. This gesture by the Muslim League paved the way for his entry into the Constituent Assembly and the rest is history- he became the father of Indian Constitution.

Muslims freedom fighters were active in the field of journalism as well. Maulana Azad used his pen against the British despite being prevented by the colonial powers a number of times. Maulana Hasrat Mohani and Qazi Nazrul Islam composed hundreds of poems crying for Freedom of India. In fact, the first journalist to be martyred in the cause of India’s Freedom Struggle was also a Muslim - Maulana Baqar Ali.

So why have these facts, and many similar ones, been relegated to the dustbin by our historians? Why these events of history are not taught in our modern Indian history classes? Why are our children’s text books bereft of these historical facts? Why this prejudice?

This is a deliberate attempt to discredit the Muslim leadership and indeed the Muslim masses, in order to spread in the Muslim community a sense of inferiority complex and to push them on a defensive stand.

The Muslim community has played a pivotal role in India’s Freedom Struggle and it is high time that Indians are repeated with these untold stories.

29 Jul 2012 - 2:53am | editor
Prime Minister Dr Manomhan Singh said that the top priority would be to restore normalcy in the violence-hit areas. Addressing a press conference in Kokrajhar during his hurricane tour to the...

31 Oct 2011 - 3:02am | Koushik Hazarika
Kaziranga National Park (KNP) reopened for tourists by Assam Forest Minister Rakibul Hussain on Saturday at a function held at Mihimukh inside the park.Elephant and jeep safaris for tourists in the...