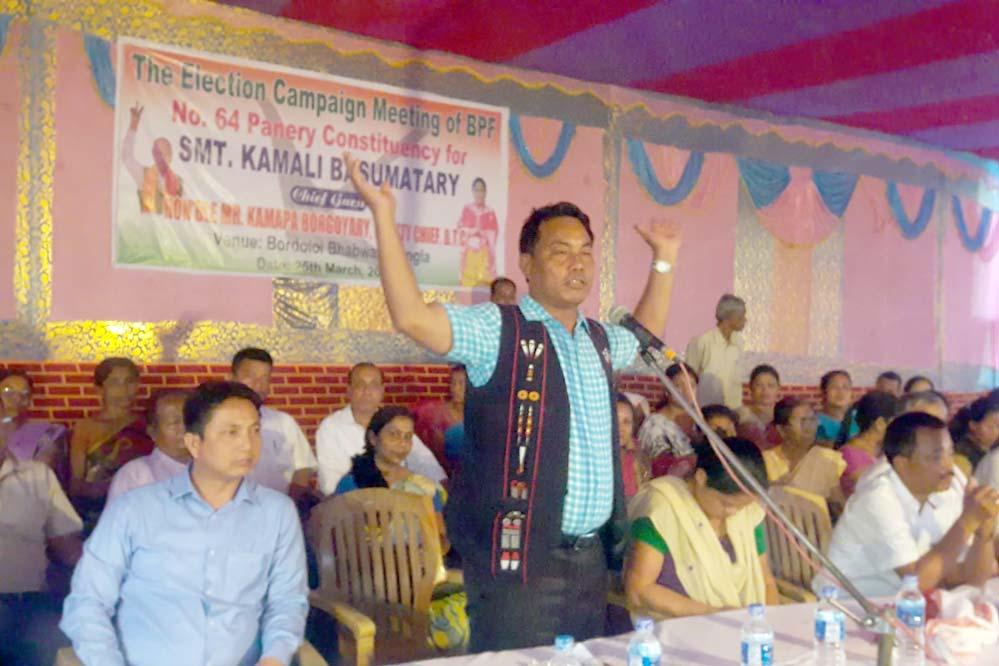 BPF has fully geared up to grab power for fourth consequetive term in 64 No. Panery LAC . A poll campaign meeting for the BPF candidate and sitting MLA of the constituency  Kamali Basumatary was  organized at Bordoloi Bhawan,Tangla today which was attended as Chief Guest by Deputy Chief BTC Khampa Borgayari. Addressing the masses Borgayari said " Our fanfare has not confined just as a wind it has come as a storm. " He further stated "AGP,BJP and BPF has come under one umbrella for the sake of the people."

Lashing out at ABSU backed UPP he said "Pramod Boro has been criticising us". Even if Pramod Boro is voted to power he cannot bring change in BTC claimed, Borgayari.

He further stated that there have been lots of development in BTC region and so even  people living outside BTC  have noticed the development and have praised BPF party . Mentioning a few developments He said , " We have built CIT,Bodoland University in Kokrajhar.  PM Modi have assured us of upgradation of the CIT into a Deem University soon.

He also said that, opposition have created misunderstanding in the name of Bodo and Non-Bodo. He also criticized ABSU have pushed young generation towards politics. He also appealed the masses not to vote for UPP. He also said that "Bhairabkunda Irrigation Project of Udalguri is under construction and after completion would generate 20 MW power."

He also said that "If we are voted to power - Women education till University level would be completely free of charge."  He also promised of Gearless scooters to all women students of Colleges  coming from distant places in  BTC region." He also assured of starting free UPSC Coaching for Meritious students at New Delhi.

Addressing the people, BPF Candidate and sitting MLA Kamali Basumatari said, "My heart goes out to the recent incident of killing of two people of the tea community by miscreants in Udalguri district." She also said, "We don't play politics of blamegame. I appeal all the masses to promote brotherhood and secularism." She also appealed the masses to vote BPF for the sake of development in BTC region.

Addressing the people ,Ananta Bhatta former leader of the central committee said "AGP and BPF has same ideology of regionalism. We will surely form government in grand alliance."

13 Apr 2011 - 9:34pm | editor
Bihu Expert Ranjit Gogoi and his group performing Bihu dance, on the eve of greatest festival for the Assamese People “RANGALI BIHU”.at Tetelia near Sonapur on on Apirl 13. PHOTO:...