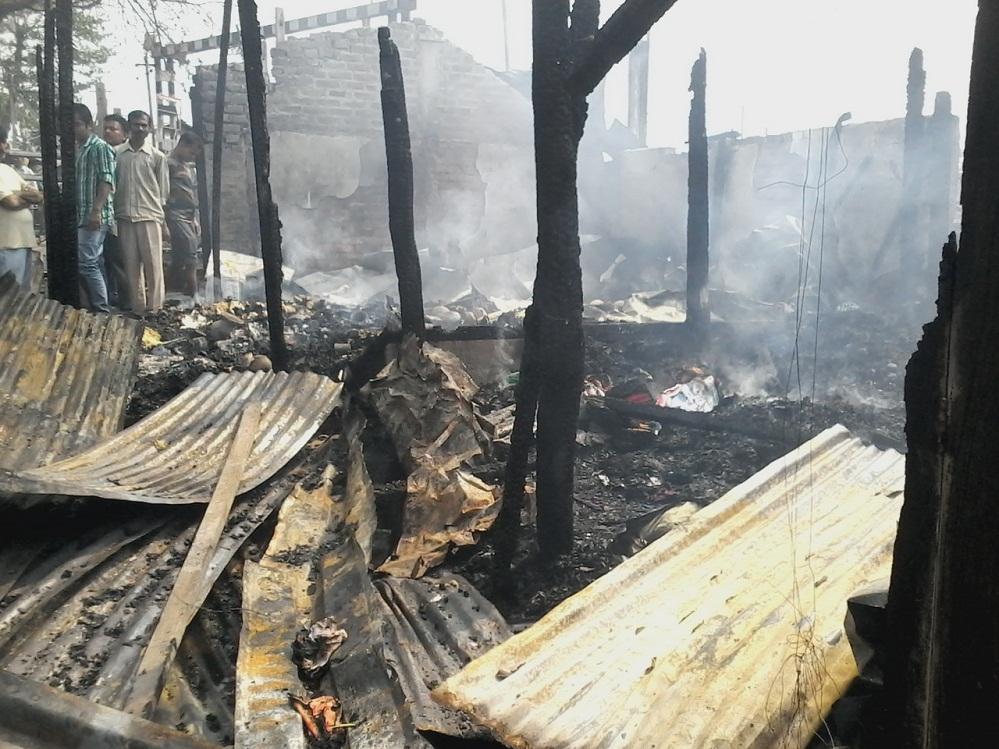 Over 15 shops along the Fakiragram main Bazar in Lower Assam’s Kokrajhar district have turned into ashes.  The fire damaged worth of nearly 50 lakhs properties following fire in gutted on Friday late night.

Various types of shops in the bazar which included medical store,hardware,clothes,grocery,stationary,fruits were completely burnt in the fire that started around 12.45 am in the last night. Just after the seeing of fire,local peoples informed to Fakiragram PS and fire service authority about incident,but nearly 45 minutes late four fire tender service rushed the spot and two hours trying, the fire was come under control when the properties have completely ruined.The fire was suspected come either from electric shot circuit or candling from the bazar. The main reason is not known clearly behind incident.The fire took damages of 50 lakhs of worths.There in the Fakiragram bazar,little some five years ago four members of a family lost their lives following fire in guuted in 2010 in the same bazar,besides damaged of huge shops.

Jiten Phukan,officer in-charge of Fakiragram PS said that the fire was come under control after two-hours that four fire tender buses rushed the spot in the night.It was suspected that fire was happened from shot circuit which engulf to other shops attached to the bazar,Phukan said.

Rajesh Saha, a damaged shop owner in the bazar said, ‘The fire occurred around 12.45 am which damaged properties in the bazar.It was suspected that the fire happened following electric shot-circuit and engulfed to 16 shops in the area.The fire tender bus rushed the spot and controled the fire by two hours. Around 50 lakhs of worth properties were completely ruined in the fire’.

Ajad Kalam, a shop keeper who lost his shop in the fire said, ‘The fire ruined my earning source properties in the bazar that occurred in the night.It was very unwanted incident which totally damaged bread of traders in the bazar.The fire fully damaged properties of the traders through which they earn their livelihood’.

Trader and local publics in the bazar alleged that the bazar was ruined severely following lately rushed of fire tender to the spot.They demanded district administration should set up a fore station in the area to meet early rushing of fire services whenever occur in the region.

Pradip Kumar Brahma,MLA Kokrajhar west LAC visited the fire spot to take stock of the incident. He expressed that the fire took damages of huge lakhs of properties as it was completely ruined the bazar area.

31 May 2014 - 9:22am | AT News
BJP leaders are pouring in at Kohora in Kaziranga to attend the huge convention on Saturday to discuss the party’s strategy to wrest power from Congress in a phase manner. Senior party leaders told...

22 Oct 2014 - 7:16am | AT News
The Assam State Primary Teachers’ Association demands CBI probe into the killing of Dijendra Nath Gogoi at the school premises in Jorhat apart from giving 48 hours deadline to nab the miscreant.In a...