Dr Kameswar Brahma,president of the sabha strongly criticized the government of Assam for neglecting the Bodo medium education and its failure in the implementation of the Bodo language as an officiate language in the state.

He said in the last 15 years, the Congress government in the state has not done a single welfare work for the growth and development of the Bodo language and education.  He said the Bodo sabha had been demanding the Government of Assam to take proper action for solution of medium crisis, including creation of separate Directorate for Bodo medium, provincialisation of Bodo medium institutions, appointment of teachers and timely distribution of text books etc, but the government is never serious in solving the crisis and the demands.

The apex Bodo literary body has also strongly voiced against the apathetic attitude of education department, government of Assam, for issuing office memorandum in case of written interview for the post of Junior Assistant for High School and Higher Secondary schools by keeping aside question papers in Bodo language.

Kamala Kanta Muchahary,sabha general secretary said that the sabha and its allied organizations strongly oppose the dictatorial attitude by the state government machineries of neglecting the Bodo language, which is also a scheduled language of Indian Constitution and instructed all the district and primary level committee of the sabha to thwart the ‘evil design of Assam government by imposing Assamese or Bengali language on the Bodos, and to take the agitational programme in district level, he said.

The House unanimously resolved that the long pending demands must be solved by the state and Central government within six months of the new govt formation. ‘If the demands are not meet the BSS will be compelled to launch a series of agitational programme with the help of other allied organizations and public, he said.

The delegate sitting also resolved to appeal the state govt to include the Bodo language as one of the subject langauge, in any interview and exams, along with Assamese and Bengali, as Bodo language being a Eight scheduled language.  The House resolved to protest if Bodo language is not included in any interview and exams question papers. : Muchahary said the Sabha has also decided to approach  the Bengal Bengal govt to issue a gazette notification to recognize the Bodo language as a mother tongue for the Mech tribal people of West Bengal and introduced Bodo as a language subject in elementary education. It also called upon the Mech (Bodo) people of West Bengal to  stand unitedly to achieve the goal.

BTC chief Hagrama Mohilary inaugurated the open session with Dr Kameswar Brahma, president of the sabha in the chair.

Mohilary,in his speech said that language recognises identity and growth of the community,so every Bodo person should love and affection to the Bodo language and literature.

4 Jun 2007 - 5:30am | editor
Haflong: An eerie silence prevails here on Tuesday even as Governor Lt General (Retired) Ajoy Kumar Singh and Chief Minister Tarun Gogoi are visiting the area to assess the law and order situation... 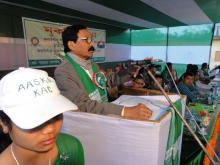 29 Apr 2015 - 10:37pm | AT News
There is no trace of two people from Assam who went missing during the massive tremor in Nepal on Saturday. "We have not been able to find out the duo. But we are still trying to ascertain their...
Follow @Assam Times