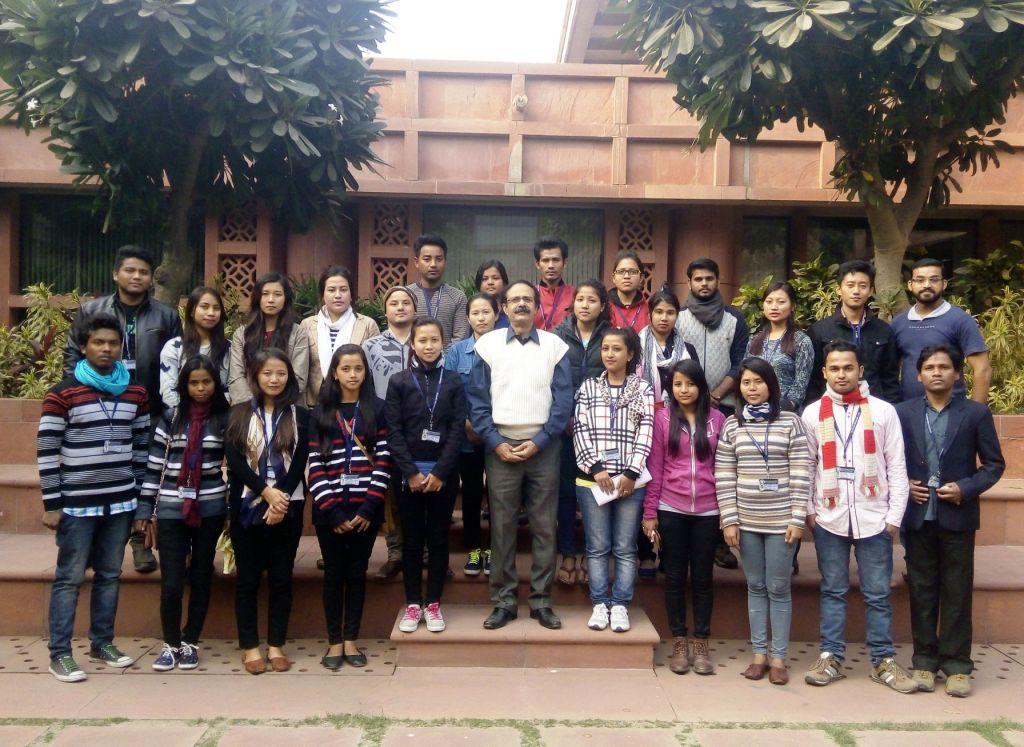 A group of MSW students from Assam Don Bosco University, Guwahati, Assam, under the leadership of Dr Luckose Jacob Associate Professor of Social Work in the School of Social Sciences  on a Study Tour in New Delhi visited the Parliament (Lok Sabha), on 11th December. They became the first group of students from ADBU to visit the parliament.

The visiting group is seen in front of the BPST (Bureau of Parliamentary Studies and Training) Lok Sabha Secretariat Parliament.

“It was in deed a once in a life time experience for us to visit the august hall of the parliament, the sanctuary of democracy,” says one of the students Jose Cherayath sending the group photo through WhatsApp.

Dr Luckose Jacob the team leader spoke over the phone from New Delhi, claiming the visit to be a historic event for ADBU. He claimed it to be a first ever feat for any group of students from ADBU established in 2008.

Apart from the regular Training Programmes, Appreciation Courses, the BPST affords facilities to officers of Central and State Governments and also to students, scholars, academics and others for short Study Visits during which the visitors are provided with the requisite orientation so that they get to know the notable aspects of the practice and procedure of parliamentary institutions.

If the Parliament is not in Session, then the visiting groups are taken for a show-round of the Parliament House. Such visits offer a very good opportunity to the participants to have a first-hand and direct knowledge about the working of the Indian parliamentary system and see for themselves the magnificent Parliament House consisting of the Chambers of Lok Sabha, Rajya Sabha, and the Central Hall. The visitors are also taken on a tour of the Parliament Museum.

Crackdown on against Chirang bombers

7 Jul 2014 - 9:29pm | AT News
Security forces are still fanning in Chirang district in search of the youths who exploded two grenades in the district on Sunday. A massive search operation is underway to nab the culprits. Top...

28 Jan 2013 - 9:25am | SK Hasan
Alongwith the rest of country, the 64th Republic Day was colourfully celebrated at Nazira under the aegis of Nazira Civil Aadministration with a day-long programme. The ceremonial function was...