26 Jul 2014 - 9:37am | Jintul Talukdar
Good news for people of Sarupeta. Courtesy the Northeast Frontier Railway. From now and onwards, the Sarupeta station will be the regular stop for the Kamakhya-Alipurduar Intercity Express.... 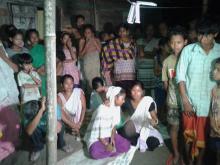 16 Jul 2016 - 12:28pm | AT News
An eerie silence prevails at Raha in Nagaoan district a day after a local boy was killed in police firing on a group of protesters who demanded AIIMS in the area. Several local organizations have...

9 Oct 2008 - 8:30pm | Daya Nath Singh
The International Day of Non-violence and the holy Id-ul-fitre festival, both observed simultaneously on October, 2, 2008 and perceptive to communal harmony did not prove its worth so far the...