The second Saraighat Film Festival, organised by North East Youth Foundation (NEYF) and supported by North East Dialogue Forum (NEDF), concluded in Guwahati on Monday. Organised at Bosco Out Reach, Ulubari, total ten (10) films were screened, out of which nine (9) were in the competition fray. The tenth film was a photo real and was not considered for the competition category.

Judged by eminent film and television personality Tinat Atifa Masood and filmmaker Vijay Naidu, the short film titled Perception was adjudged as the best film. The film is being produced and made by the students of Dibrugarh University under the banner of Niyor Productions. Viewers' choice award went to the film titled We, which was made by the students of B Borooah College.

Apart from different schools, colleges and institutions of Guwahati, there were also participants from Shillong-based English and Foreign Language University. SFF's theme is mainly on issues of human rights and the themes of the films that were screened on Monday varied from child labour to school-life bullying.

Organised since last year, SFF is also a humble effort of NEYF to express its solidarity with Irom Sharmila's stand against Armed Forces (Special Powers) Act, 1958, who has been on a fast since November 2, 2000 urging the government to repeal the act, which a number of civil body organisations have termed as 'draconian'.

"Sharmila herself is an woman and we felt that it would be good to begin the campaign from in front of a girls' college. During the campaign we also found out that a number of youngsters today is unaware of Sharmila, AFSPA or her demand for repealing it," Ranjan K Baruah, Convener of NEYF said while speaking at length about the Saraighat Film Festival and its signature campaign right before the start of the festival.

"Through the film festival we want to chain together more and more youths and the young minds. The theme of the festival is kept simple and it is on human rights issues," Baruah further said, adding, "Through this platform today, we also want to put forward certain demands in front of the government. We demand that the AFSPA should be repealed soon, the MPs of Assam and North East should raise the question of repealing AFSPA at the next session of Parliament and lastly, no civilian should be harassed, killed or persecuted under AFSPA. To make our demands heard, we will also write the same in a post card and post it to the MPs of NE, requesting them to at least raise the question in the parliament."

Expressing her happiness about the quality and number of films received by the SFF at its second edition, Tinat Atifa Masood, said, "I am happy to see the number of entries this year. Although there is a lot to improve as per the quality of filmmaking is concerned, but efforts of these young people should be appreciated for they have come up with such different and vibrant ideas. I must thank the organisers of Saraighat Film Festival for hosting such a wonderful programme."

"It was good to see so many young people coming up with different ideas and touching so many delicate issues of the society. I wish them all the best and hope that the festival grows in stature in the years to come," Vijay Naidu said while delivering his speech.

Expressing their views, a number of participants also expressed their happiness and said that the festival has provided them with a platform, which they said they would use in a more holistic manner in the years to come. The festival was attended by around 60 people.

28 Apr 2014 - 9:13am | AT News
Guwahati Police claimed to have captured a top Garo insurgent leader in Guwahati hardly a week after he escaped police at an encounter with Meghalaya police.Identified as Tensang Sangma, the UALA...

25 Feb 2009 - 3:57pm | editor
Hardly a month after the elephant festival to counter the man-elephant conflcit, a villager was trampled to death by a wild elephant in the outskirts of the Kaziranga National Park on Tuesday. The... 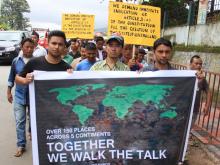