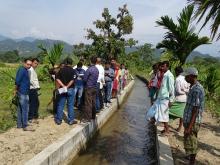 27 Feb 2008 - 1:58pm | editor
The All Assam Students Union has demanded a CBI enquiry into the rhino poachings at the Kaziranga National Park and alleged that the poachers are backed by a section of forest officials and also by...