The fate of nine Congress MLAs who have been waiting to join BJP still remains uncertain. Sources told Assam Times that the MLAs have only agreed to join the party. But they should keep waiting. The impasse persists only on the ticket issue. “They have met party president Amit Shah and expressed confidence over Prime Minister Narendra Modi. Let them wait,” said the senior leader.

According to him, “the role of the state party leadership is very crucial to decide on their fate. We have a set of rules which is applicable for all.” Another leader told Assam Times that the central leadership will have to sort out the problem only after consultation with the state leadership and that it would take time. “We don’t have any problem to welcome anybody who repose trust on us. But we are not bound to accept any condition,” said a state senior leader.

“The nine Congress MLAs who want to join BJP, mostly, want to join the party provided they are allowed to contest in their own constituencies. The possibility is unlikely,” said the senior leader.

8 Feb 2014 - 3:18pm | AT News
BJP’s prime ministerial candidate Narendra Modi said that the resources full Assam have lakhs of poor people.In his address at the huge rally at the Veterinary College Playground on Saturday, the BJP...

25 Jun 2010 - 4:50pm | editor
Amid utter confusion cen tring aroud Ulfa-government, former intelligence bureau chief P B Halder held a crucial date with Dr Hiren Gohain in Delhi on Thursday. Both they are understood to have... 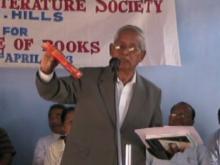 6 Apr 2013 - 12:48pm | Anup Biswas
Under the aegis of Hmar Literature Society (Hmar Sahityua Sabha) a book titled ‘History of The Hmars in North East India’ ( with special reference to Assam ) authored by Rev Hrilrokhum Thiek was...