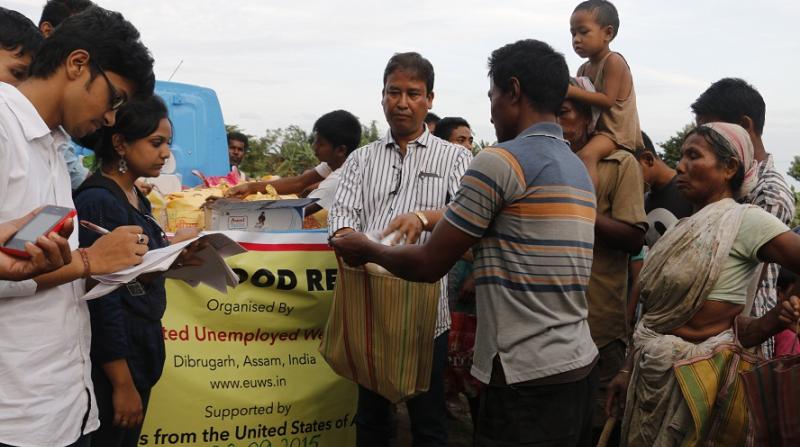 In major relief for the flood-hit people in Dibrugarh, two non governmental organizations have set up three camps to help these lot get out of the blues. Educated Unemployed Welfare Society along with a US based organizations have been providing relief materials, medicines among the flood affected people who have been rendered homeless in the time of the ravaging flood wave.

The Educated Unemployed Welfare Society organized the fourth post flood relief campaign for the flood affected people in Kalakhowa area of Khowang on Wednesday. The vitals roads in the area are still remaining ravaged not to speak of the interior places. The NGO officials distributed relief materials to the villagers who came to heave a sigh of relief. Milk was especially for the babies in the relief camp funded by the benefactors and supporters from the United States of America(USA).

Meanwhile, the website of the NGO(www.euws.in) has set up payment gateway for the purpose to help people contribute. Treasurer Manoj Borgohain, Momina Wasim (Project Manager), Kavita Gogoi (Advisor), Bismoi Bhradwaj and other portfolio members of the organisation made it successful mission.

26 Oct 2007 - 7:56am | pbaruah
The Assam Pradesh Congress Committee (APCC) serves show cause notice to MP Kirip Chaliha alleging his conspiracy against Chief minister Tarun Gogoi.According a report by a vernacular daily from...

4 Jun 2017 - 10:13am | Ranjanjyoti Mahanta
In a shocking incident, a 50 year old man named Tapan Pal of Juria in the Nagaon district woke up while he was being taken to the funeral. The incident happened on Saturday afternoon when his family...

24 Jun 2012 - 7:05pm | editor
The Science Express-Biodiversity Special train of the Union ministry of environment and forest arrived at Kamakhya railway junction in Guwahati on Saturday. The special train was inaugurated jointly...