17 Feb 2012 - 2:37am | Ritupallab Saikia
In protest against the non-fulfillment of their long standing demand, the Sarupathar Chambers of Commerce along with several other organisations staged a rail blockade agitation at Sarupathar... 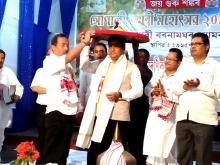