The CJM court in Shillong convicted him with a fine of Rs.5, 000. In yet another case on the same ay, police picked up Panbir Ray Wahlang and Denis Swer for the offence of nuisance under the influence of alcohol at Lachumiere near Horse Shoe building. The CJM Court  in Shillong sentenced them to a payment of fine Rs.5,000/ each. Any default of payment would force them to a undergo simple Imprisonment of 2 days.

3 Jun 2012 - 3:27am | editor
Police in Guwahati arrested six people linked to Garo National Liberation Army on Saturday and seized huge ache of arms and ammunition from their possession. The consignment, including rocket... 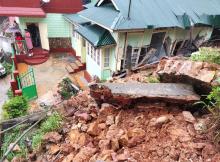 4 May 2019 - 8:38pm | AT News
Guwahati: Fani, neither the name of a lady nor a snake struck Odisha leaving a trail of devastation in the form of a storm and rains before it entered the north eastern region with relentless rains...
Follow @Assam Times