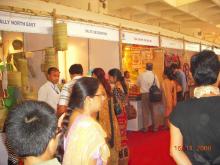 NE Writers huddle to define themselves

12 Mar 2012 - 3:57pm | Syed Miraz Ahmed
Writer's writing in English representing NorthEast India inspite accolades and honors has for long been trying to define their ilk. To assert their claim albeit empathetically The North East Writers...

31 Jul 2014 - 9:26pm | AT News
Five people were feared dead when the camp in which they lived in collapsed in landside in Cachar district bordering Manipur. The incident took place in a remote area of Kantum under Lakhipur on...