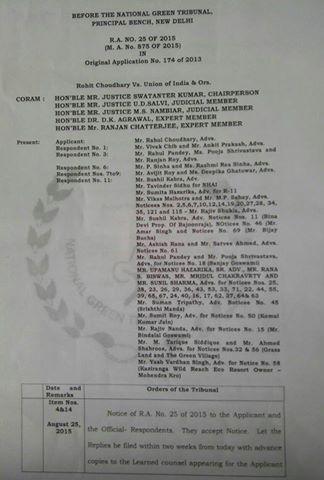 Any construction in and around the Kaziranga National Park will not be allowed. The government will have to ensure it. This was what the National Green Tribunal directed on Tuesday.

The National Green Tribunal is dead opposed to any construction in and around the.
A NGT bench headed Chairperson Justice Swatanter Kumar asked the government to file a map of the park with its boundaries and the construction has been restricted to 5 km radious.

The tribunal asked the government to ensure the strict compliance of the orders of the tribunal and no construction whatsoever should be permitted to come up in and around the world heritage park.

The tribunal will resume hearing on September 14.

The government has been asked to file status report on steps within two days to minimise the increasing wildlife casualties in the National Park.

The tribunal's direction came while hearing a plea filed by environmentalist Rohit Choudhury opposing expansion of NH-37 which passes through Jakhalabandha to Bokakhat.

The tribunal had in July issued bailable warrant against 28 dhabas, resorts and other commercial establishment owners for failing to appear before the tribunal and raising illegal structures in the park.

23 May 2016 - 7:12pm | Sasanka Talukdar
Two youth died on the spot in a fatal accident at Baghmara, Monday around 2.30 pm. The incident happened at Bajali when the duo's speeding motor cycle collided with a truck head on after hitting a...

8 Feb 2014 - 10:15pm | AT News
Narendra Modi’s speech in the Khanapara rally seems to have drawn mixed response form the political parties.Senior BJP leaders have called it an illuminating. But Congress, Left and AGP leaders have...