Flood waters continue to wreak havoc in Arunachal Pradesh submerging a huge portion of the hills state on Sunday.

The worst-hit districts are Lohit and Namsai where the situation has gone from bad to worse following the sudden rise in the water levels of the rivers Lohit, Noa-Dehing, Kamlang. These rivers have started flowing dangerously following incessant rains in the catchment areas during the last couple of days.

Surface communication remains heavily disrupted apart from the damage of standing crops on thousands of hectares of land.

There is no hope of restoration of surface communication between Alubari and Tezu in Lohit districts for the next several days. Same scene prevails in Mahadevpur, Piyong, Lathao, Chongkham and Wakro where flood has inundated many areas. 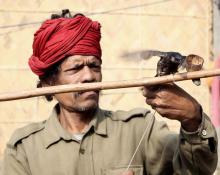 18 Apr 2018 - 11:54am | Akshaya Pranab Kalita
NAMRUP: More than 3,000 tea garden workers and their family members raided the management of the Dilli Tea Estate in Namrup reiterating a slew of demands on Wednesday. They thronged the office...

Call for vaccination in Assam to fight Japanese Encephalitis