The stage is set for the Tiwa Autonomous Council polls on Wednesday. The polling is set to begin 8 in the morning in Nagaon and Morigaon districts. Morigaon is gearing up for polling at 190 booths to cover 19 council constituencies. The polling will take place at 95 booths covering 12 constituencies in Nagaon.

As many as 2, 22, 676 voters will exercise their franchise to decide on the fate of 119 candidates in the fray. The constituencies, mostly, will witness a triangular contest of BJP, Congress and Tiwa United Forum.

2 Jul 2015 - 9:35pm | AT News
A massive inferno reduced properties worth lakhs of rupees to ashes in Basistha area on Thursday forcing the authorities to deploy army to deal with the situation. Originated at a hut, the... 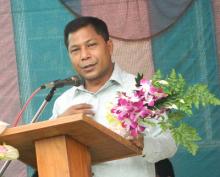