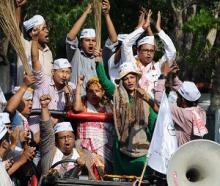 7 Aug 2008 - 7:16pm | bobbyramakant
"In terms of maximizing impact and joining forces to control the epidemic, this merger is an innovative and bold move," said Dr. Peter Piot, UNAIDS Executive Director. "This is the sort...

27 Jan 2014 - 4:41pm | AT News
BPF will contest in Kokrajhar and Mongoldoi in the Lok Sabha poll and will help Congress win other seats.This was what BPF president Hagrama Mohilary told reporters when he accompanied Biswajeet...