BJP’s central leadership has appointed senior leader Mahendra Singh as the in charge of the party’s affairs in Assam. The party has formally announced the appointments on Friday. Senior leader and Assam MP Ramen Deka will look after the party affairs in Arunachal Pradesh. 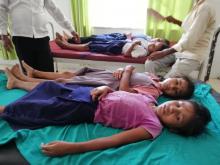 29 Aug 2019 - 10:33pm | AT Kokrajhar Bureau
KOKRAJHAR: At least 16 students hospitalised post consuming  medicines to control worming at Digaldonga in Baksa district on Thursday. According to information, students from BC Vidyapith ME...

23 Feb 2014 - 2:07pm | AT News
Chief Minister Tarun Gogoi is scheduled to distribute land pattas to 500 families on Monday.Officials told Assam Times that Gogoi will hand over the land pattas at a function at Sankardev Kalakhetra...