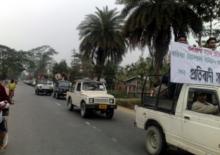 20 Sep 2007 - 2:28am | pbaruah
The BJP activists in the city are the continuing the drive to check illegal Bangladeshi migrants.Speaking to Assam Times, the leaders here say the drive began on September 16 from GMC ward number 16...