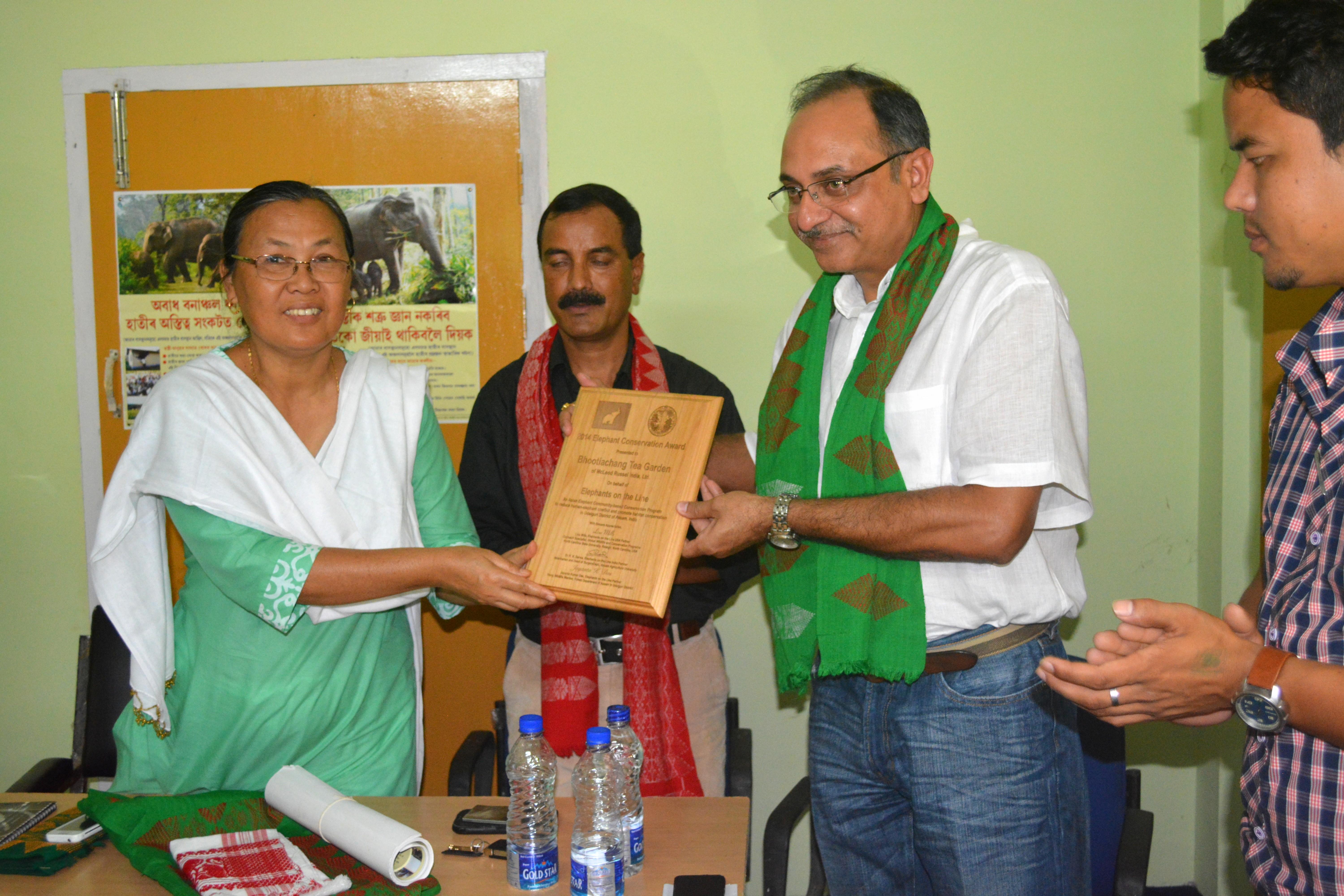 Bhootiachang and Paneri tea gardens of Udalguri district under MacLeod Russel India have been awarded 'Elephants Conservation Award 2014' recently at a ceremony at Nonai Forest Range Office on June 13. The award was launched last year by Elephants on the Line,a programme organized by a few elephant loving people and officials of USA,Bhutan and India last year for the conservation of wild elephants and to work jointly for mitigation of man-elephant conflict in Udalguri villages district bordering Bhutan.

The one year programme was supported by North Carolina State University,USA in association with Udalguri administration and Dhansiri Forest Division,Udalguri. The programme has promoted solving of India-Bhutan trans border conservation issues.It also opened up windows of cooperation among civil,forest and people of both the countries since July 2014. The award ceremony which was held at Nonai Forest Range Office was conducted by EOL Assam coordinator J.K.Das. Sadhana Hojai,Deputy Commissioner presented the 'Elephant Conservation Award 2014' to AK Sing,Senior Manager of Bhootiachang tea garden while noted journalist and Managing Editor of DY365 Pranay Bordoloi (Also the Hony.Member of Assam Wildlife Board) presented the award to Wasim Haque of Paneri tea garden.

DC Hojai expressed her satisfaction at the good works done by the tea gardens.She also appealed all the tea gardens of the district to work hard to mitigate HEC in Udalguri and to plant as much as trees in vaccant lands to prevent further encroachment.Pranoy Bordoloi assured EOL members all possible help and cooperation for the conservation of flora and fauna of Assam. He requested EOL for its expansion on all Assam level. AK Sing ,Senior Manager of Bhootiachang tea garden while thanking EOL members,district administration and forest department for the award assured that their tea gardens would do more good works for the conservation and welfare of both wild elephants and villagers. On the issue he assured to sponsor two domestic Kunki elephant to be deployed in HEC villages.

The award presentation ceremony was attended by several distinguished people including- GN Adhikari, DFO,Dhansiri Forest Division,Udalguri;Mubina Akhtar, EOL Core Member and Hony.Member of Assam Wildlife Board; Dipen Boro,EOL Core Member and Central Vice President,ABSU etc. It needs mentioning that a two days workshop on GPS/GIS/RS was also arranged by Elephants on the Line for EOL and forest officials which was conducted by Pranjit Sarma and Bipul Das of Aranyak, Assam on June 12 and 13 at Nonai Forest Range Office.

25 Jan 2015 - 4:34pm | Hantigiri Narzary
The Kokrajhar district administration ceremonially distributed the Rehabilitation Grant and Financial Assistance to the family victim of the carnage on December 23 last in Kokrajhar district, which...

30 Apr 2018 - 11:54am | Nikhil Mundra
Hojai: A worker died when he fell from a tree he was cutting in Hojai sending a pall of gloom on Sunday.   The incident took place at Dimarupar near Nilbagan near Murajhar in the District....