Rain waters are back to wreak havoc in Guwahati on Friday following the incessant rains for the last two days.
Massive waterlogging has disrupted normal life in Lachitnagar, Nabin Nagar, Anil Nagar, Tarun Nagar, Chandmari areas from Thursday.
Surafce transport remains off from these areas under the impact of the paralyzing waterlogging.
"The rivers Bharalu, Basistha and Bihini are not in a position to contain the rainwaters in the city. We are taking steps to divert the rainwaters to the Bharalu by using pumpsets," said distrit administration officials.
The situation is likely to turn worse if the rains refuse to halt. 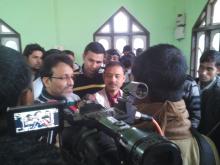 Lobbying in Delhi for cabinet berths

26 Aug 2016 - 12:24pm | AT News
Amid hectic lobbying in New Delhi for ministerial berth, Chief minister Sarbananda Sonowal is preparing to expand his cabinet in a day or two. Sonowal is believed to have prepared a list. But it has...