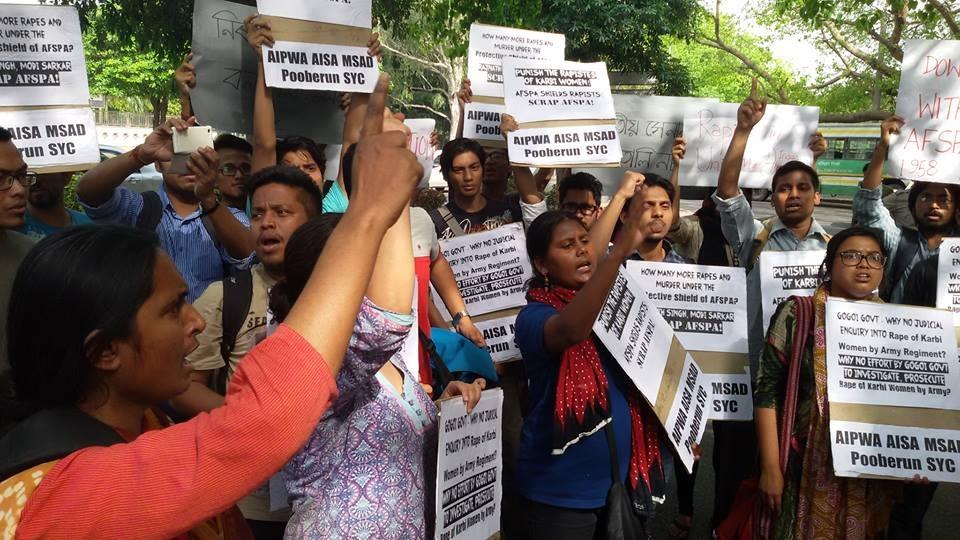 Women's and students' groups hold a protest at Assam Bhawan today against the rape of three women in Karbi Anglong, Assam, by Army personnel. The protest was joined by Pooberun, All India Students' Association (AISA), All India Progressive Women's Association (AIPWA), Student Youth Council (SYC), North East Forum for International Solidarity and Manipur Students' Association of Delhi (MSAD). On 6 April 2015, around eight jawans carried off a 15-year old girl into the forest; when her mother and another woman rushed to rescue her, the jawans raped all three.

An ICDS worker who tried to intervene was also injured, and a three-year-old baby was hit with the butt of a rifle.

“Although protests have been ongoing in Karbi Anglong ever since the rape, none of the jawans have been arrested. The reason is clear: the Armed Forces (Special Powers) Act - AFSPA - offers the Army a shield of impunity, and a licence to rape and murder. Instead, the victims are being pressurized and terrorized into withdrawing their complaints", said Kavita Krishnan. “We are here to tell the Assam government that it cannot wash its hands off its responsibility. We demand that the Assam government immediately seek permission to prosecute the rape-accused Army personnel, and file an FIR. Also, why can’t the Assam Government order an independent judicial enquiry, instead of allowing the Army to tamper with evidence and witnesses?”, she added.

After the horrific rape and murder of Manorama Devi in Manipur in 2004, an Enquiry Commission under the Chairmanship of C. Upendra Singh (retired District and Sessions Judge, Manipur) was set up by the Manipur Government because of the explosive public pressure. “Isn’t this the least the Assam government can do, immediately? The Upendra Singh report later played a crucial role in the fact that the Supreme Court ordered the Centre to pay compensation to Manorama Devi’s family – thus tacitly admitting to the crimes of the Army and the culpability of the Central government”, said Sucheta De, national President, AISA.

Mongve Rongpi of the Student Youth Council, Chinglen of the North East Forum for International Solidarity, Jyotirmoy Talukdar from Pooberun and Rakesh of the MSAD addressed the protest. They pointed out that the Army and Ministry of Defence is seeking to distract and confuse the anti-rape agitation. The Army is claiming that there is no need to prosecute, it will itself take action against the rapists. But in fact, the Army’s latest claim is that ‘the rapist jawan’ has committed suicide inside the Army camp. This claim is extremely suspicious. The entire regiment, after all, was involved in the attack on the village, and the three women were gang raped by at least eight men. So, there was no single ‘rapist.’ Moreover, the protesters are seeking investigation and prosecution of the entire regiment and its commanding officer. “What proof is there that the man who died was indeed one of the rape-accused? The survivors have not yet been given any chance to identify the perpetrators. Further, a suicide inside the Army camp should be treated as a suspicious death and must be probed to check for foul play”, said Mongve Rongpi, who gave a first-hand report of the situation in Karbi Anglong. Rongpi has been to the site and met the victims.

Rakesh from MSAD pointed out that the struggle against AFSPA has been going on for years, with no government willing to act on the demands of the people of the north-east. The protestors also pointed out that the Justice Verma Committee had recommended that the continuance of AFSPA in the law books be reviewed. The Committee had also recommended that the requirement of central government sanction for prosecution of armed forces personnel should be specifically excluded when a sexual offence is alleged. Not only that, the Verma Committee had recommended that complainants of sexual violence in conflict areas must be afforded witness protection, so that they can give witness without fear of reprisal by the Army against their families; and special commissioners should be appointed in conflict areas to monitor and prosecute for sexual offences.

The protestors also submitted a memorandum to the Home Ministry demanding that the Home Ministry withdraw AFSPA – which provides a shield of immunity to army personnel, that the Central government must immediately allow the Assam police to file a rape FIR against the accused Army personnel in Karbi Anglong and that the Central government must ensure that the Army is not allowed to influence the justice process and intimidate witnesses.

23 Jan 2008 - 5:55am | bobbyramakant
A 'jattha' will begin on 26 January 2008 from Nandigram in West Bengal marching and connecting all people's struggles and movements across the states of India to end in Gorai, Mumbai, Maharashtra on...