The first unit of 250 MW(250X3) of Bongaigaon Thermal Power Project(BgTPP),Salakati would be commissioned by May next month as boiler light up activity was accomplished on November 29 last year. Utpal Chakravarty,GGM,BgTPP,Salakati while addressing the media persons at a press conference held at conference hall of BgTPP at Salakati today in Kokrajhar said that all kinds of project activities and preparations for commissioning of the first unit of power production 250 MW would be commissioned by May next month and second unit of the project will be commissioned after 14 months and final or third unit production of powers to the project i.e 750 MW would be completed by 2018 next. He told that the BgTPP has decided to expand the vendor base to bringing uniformity in procurement process at all power plants and transparent and more efficient source standardisation.He said atht power project is going for vendor enlistment for all material procurement and works contract on all India basis involving each and every potential vendor/contractor through which all future tenders of NTPC plants will be issued to enlisted vendors only. He said that BgTPP is providing community particiaption and extending social welfare schemes through state government to build a healthy integration involving various departmental activities.He also told that BgTPP had sanctioned 50 lakhs for Sericulture,three crores to construct a RCC bridge at Haloadal in Kokrajhar,but no any construction and production was saw till today,he informed. 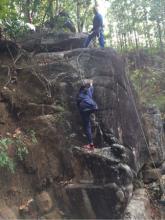 10 Feb 2016 - 11:58am | AT News
Nehru Yuva Kendra Nalbari is organising an Adventure Camp at Hajo Rock Field from February 8-12, 2016. Around 25 participants from different youth clubs and other organisation like NCC from Nalbari,...