A team of experts from the Wildlife Institute of India, National Tiger Conservation Authority, ministry of environment and forests is continuing rhino census in the Kaziranga National Park on Friday.

The officials told Assam Times that they are sure that the census would give them a ray of hope. They expect that the rhino population would be encouraging like never before despite being riddled by poaching incidents. 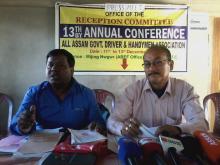 Angkushita wows the world with gold

26 Nov 2017 - 9:03pm | AT News
sGUWAHATI: The wait is over. Angkushita Boro has fetched huge pride for India striking gold in the AIBA youth boxing world championship in Guwahati on Sunday.The promising pugilist from Dhekiajuli in...