Health check up camp at Guwahati 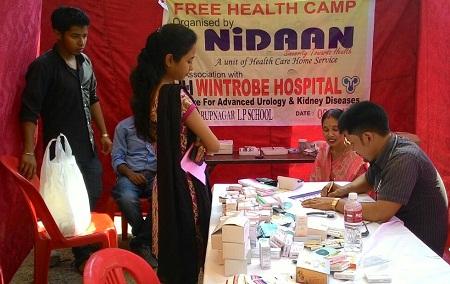 A free health check up camp was held at Rupnagar LP School, Guwahati on SUnday.  It was attended by many experienced doctors from Wintrobe Hospital, other invitees and people from the locality who got the benefit from the free health check up camp. Dr Pranjal Barman, Dr Diganta Brahma, Dr Apurba Baishya, Dr Pragyan Kalita, Dr G Hazong and Dr Nareswar Barman (Cardiology) rendered their free service for the needy people.  More than one hundred and twenty people were benefitted from the health camp who received services from the doctors and other health professionals.  Some blood tests were done apart from providing some free medicine. Ratul Das and Alvish Ali Nawaz from Niddaan, the organiser, coordinated the health camp which has been praised by the local people. Nidaan was previously known as Ayushman which has changed its name in last general meeting.

29 Aug 2012 - 2:52am | editor
Amid violent bandhs chief minister Tarun Gogoi on Tuesday said that these would only complicate the situation. Talking to reporters in Guwahati he said that the time was not proper to call...