Rhino poaching back in Kaziranga

Despite round the clock vigil, rhino poaching refuses to die  down in Kaziranga. Poachers have struck the abode of one horn rhino on Wednesday sending shock and anger across the state.

Forest authorities told Assam Times that the poachers killed a full grown rhino at Burhapahar range in the wee hours. The horn is missing from the carcass that bears bullet injuries.

This is the sixth rhino poaching incident that riddles the world heritage site this year alone. 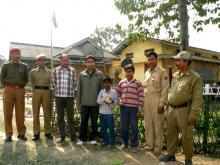 19 Aug 2012 - 3:10am | editor
Unidentified swindler duped a 67-year-old woman drawing a huge amount of money through ATM in Jorhat on Satrday. According to police, Baharti Kalita asked a stranger at the counter on Friday night...