The incident took place in Balidanga where the local residents told Assam Times that militants sneaked into the hamlet in the wee hours and burnt several hunts belonging to the Adivasi people.

“We cried for help when the militants burnt our huts. We were forced to flee from our houses in the wee hours. But we have not seen any policeman around us,” alleged a local resident before Assam Times.  These have forced thousands of villagers to rush to the relief camps set up by the district administration. 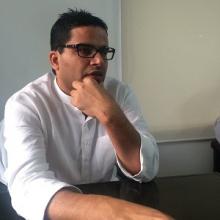 5 Apr 2011 - 2:43am | Ritupallab Saikia
After incessant rain for the last two to three days, today the sun smiles, much for the relief of the contesting candidates and the voters of the Golaghat dist. The voting turnout percentage of the...

9 Sep 2015 - 9:52pm | Hantigiri Narzary
Panther Club of Parbatjhora lifted the champion trophy of Monsoon Football Championship organized by civil military liaison and relations of the 3rd Rajput Regiment of the army at Patharghat in...