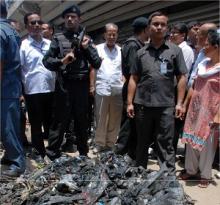 10 May 2014 - 12:51pm | AT News
Chief Minister Tarun Gogoi on Saturday gave hint of a slew of measures to help Guwahati get rid of the artificial floods.Inspecting the flood effected Ganeshguri, Zoo Road and Bharalumukh areas in...