5 Jul 2009 - 3:29pm | editor
The overall flood situation remains unchanged in Assam where one person was swept away in Majuli. The Brahmputra and its tributaries are flowing above the danger mark, affecting over five lakh people... 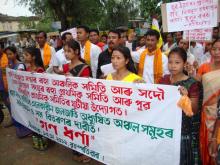 18 May 2012 - 12:31pm | Dibya J Borthakur
More than 200 people led by All Tiwa Students’ Union and All Assam Tribal Sangha , Raha unit,enraged at the partial looks of Raha Town Committee towards their several civic problems mainly in...